Summary
There is currently 480,000 APWine Worth of Space in the Bancor Pool. Bancor provides the treasury with two key features Impermanent Loss Protection and Single Sided Staking. This will mean the DAO is guaranteed a return on it’s investment, will need to provide no counter asset like ETH, and will grow the depth of APWine Liquidity by just under 1M USD (50% BNT from Bancor DAO/ 50% APW from APWine DAO)

Context
Bancor is a DEX with over 1 Billion USD in TVL. The Core product offerings are Single-Sided Staking and IL Protection which make it the optimal solution for DAO sourced Liquidity. The DAO would be opening up a new and insured revenue stream while at the same time allowing for lower slippage which should allow entry for larger investors.

It’s also worth noting the Bancor Community is well aligned to work with APWine when B3 Launches since single sided LP tokens are a perfect fit for the APWine future yield model. Bancor also has a favorable view of APWine as can be seen by the fact we received one of their rare Liquidity Mining Campaigns. This is not the last we will receive as well, should we choose to launch dual LM on B3 the Bancor DAO has already approved 50,000 BNT to be distributed in the APWine Pool over 24 months.

Rationale
The BancorDAO has already approved the Co-Invested BNT Here: Proposal: Whitelist APWine.fi ($APW) / 250K BNT Co-investment (2nd attempt) - DAO Archive (SUBMITTED) - Bancor Governance Forum
All that would be required of the team is a simple approve() and addLiquidity() functions on the Bancor APWine Contract.

Means / Technical Implementations
All that would be required of the team is a simple approve() and addLiquidity() functions on the Bancor APWine Contract.

Should we implement this proposal ?

Hi, Steven from Bancor here. @Tenzent shared this proposal with me and I wanted to add my support.

Firstly, would love to see APWine do this. It has become popular over the past few months as the combination of single sided staking and IL protection just makes sense for a treasury

We will be happy to help coordinate.

Available to answer any questions.

Could you edit and add a poll to your post so we can have a vote here to gauge interest in this sort of proposition? I like the idea as greater liquidity depth, IL protection, and further integrating ourselves into the decentralized economy are always great pluses.

Just to clarify, in the scenario proposed, the APW DAO would send 400k($408k) APW to Bancor in which Bancor would provide the other $408k in BNT? Thus allowing users to do ETH->BNT->APW or vice versa? Bancor would also cover any impermanent loss the DAO suffers from the pair as well?
If these are all the case, then I see no problem with such an arrangement. Increased liquidity is always positive because it allows larger positions to be taken and increases the flexibility of the token. 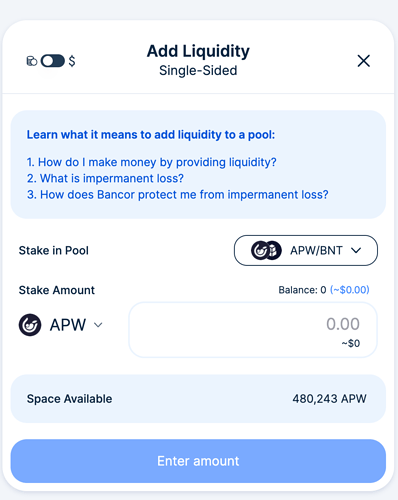 there is room for 480K APW which would result in the protocol staking the BNT for the pair, yes.

Users can already trade APW with anything in the Bancor Network (ETH, WBTC< LINK, Stables etc.)

The interesting part, is that Bancor protects users from IL. this means, if you stake 480K APW - you can expect to later withdraw a greater number.

I don’t seem to be able to add a poll, perhaps there is a setting on the governance forums that prevents one from editing original posts. and to your clarification, yes that is correct. Think of it like Ondo Finance except the primary asset (AKA the one that is covered from IL) is APWine and there is no fixed time period.

Poll added, I’ll check the settings to allow everyone to post one

Thanks for this proposal, can you tell us more about the Dual LM program ? Does it mean that the pool would be incentivized with BNT & APW ?

Sure, Everything can be read here: Proposal Addendum: Incentivize users to migrate to V3 by matching token side LM rewards with up to 50,000 BNT per pool. Available once per pool - offer open until the end of May 2022 - LEVEL 1 (DRAFTING) - Bancor Governance Forum

Here would be the key details:

Thanks for the feedback, I support this proposal

Adding some extra discussion on the discord about this topic: 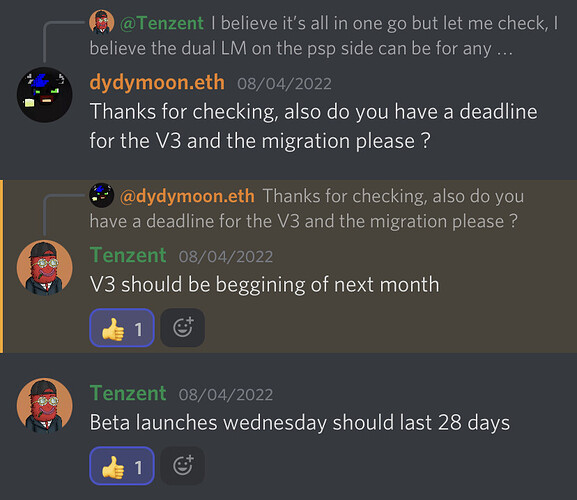